The pace of innovation in the blockchain scene makes it hard enough to keep track of developments. Despite its importance and relative novelty, the topic of the design of blockchains and their consensus mechanisms often lies behind the scenes. However, the transition of the Ethereum network from a proof-of-work to a proof-of-stake consensus algorithm put it right back on the map.

In this article, we’ll dive into modular vs. monolithic blockchains, the difference between these two blockchain architectures, how they work, and lastly, their benefits and tradeoffs.

First of all, let’s have a look at the need for different blockchain architectures, such as modular and monolithic, a story that starts with the blockchain scalability trilemma. This trilemma points out that blockchains in the way we often think about them can only meet two out of the following three properties:

Security refers to the capacity of the network to survive an attack. This precept is a middle tenet of blockchains (no chain would advertise itself as unsafe!) and ought to in no way be compromised, so the real tradeoff is usually among scalability and decentralization.

Decentralization in the context of blockchain systems points to the level to which a single user (or entity, or group) can take over the network and enforce their will. For a blockchain to be decentralized, hardware necessities ought not to be a hindrance to participation, and the resource necessities of verifying the network need to be low.

Scalability refers to the potential of a blockchain to handle an increasing amount of transactions while keeping resource necessities for verification low. Even if you increase the block size and the potential of transactions that may be covered in a block, sadly, larger block sizes result in the centralization of the community as the hardware requirements of jogging complete nodes will increase in response to the need for better computational output. Scalability is often measured in how fast a network can process transactions while keeping costs low.

Now, scalability has been a major challenge for blockchain systems. In essence, it’s practically impossible to optimize a single-layer monolithic blockchain network for all three core properties. The idea of using multiple layers instead of a single base layer to execute all four functions (consensus, execution, data availability, and settlement) emerged in answer to this.

Instead of optimizing for all three properties on a single layer, some proposed to design a system that optimized for one or two properties on one layer and optimized for the third property on another layer. This gave origin to the concept of monolithic vs. modular blockchains.

What is a monolithic blockchain?

Every single task is carried out within a specific (limited) space, from data availability to transaction execution. Bitcoin and Ethereum (without considering layer-2 or rollups) can be said to be the two most prominent examples of monolithic blockchain architectures.

With a monolithic blockchain, it is very easy to bypass transactions with fewer nodes when all of them arrive at a consensus, as opposed to passing them to several random nodes in the network.

In monolithic chains, consensus is achieved by nodes agreeing on what transactions to be processed for new blocks, including the order of transactions. This establishes a common state of the network at any given point in time.

This characteristic of the monolithic blockchain guarantees the commitment of transactions to the chain’s history to guarantee the integrity of each block. In a proof-of-work blockchain, miner energy is expended on new blocks, while validators are needed in the case of a proof-of-stake blockchain.

Benefits and drawbacks of monolithic chains

Let’s have a look at the benefits and drawbacks of monolithic chains.

A monolithic blockchain can offer extra value in the long run, provided users continue to use the token. They are easy to recognize and relatively simpler to implement and design.

Some of the major disadvantages of using a monolithic blockchain include:

What is a modular blockchain?

As we established above, if you try to run all four functionalities (consensus, execution, data availability, and settlement) at a chain’s base layer, this ultimately limits the system's capacity and, subsequently, its total throughput. A modular chain separates the system into several possible parts or additives that are independently developed.

In a modular blockchain structure, the execution layer is independent of the bottom consensus and data availability layers, permitting nodes to execute transactions separately rather than performing all the transactions to test validity within a limited space or block. Cosmos and Celestia can be said to be the most prominent examples of modular blockchain architectures.

Let’s examine the architecture design and some of the key features of a modular blockchain design. In modular chains, three core layers work independently to make its output easier and quicker:

The consensus layer establishes the set of guidelines to be observed through nodes for verifying and validating blocks and reaching consensus. This ensures that there is an agreement among all of the nodes connected with the installed blocks and transactions, thereby guaranteeing true security and decentralization.

The data availability layer manages the on-chain and stale-chain blockchain records, making sure that records are available and public for everybody to look at. Numerous blockchain tasks, including Polygon Avail, are presenting data availability solutions to convert conventional (monolithic) blockchain designs to modular ones.

The execution layer executes all of the transactions to supply top-rated records, which are then saved on the blockchain network.

Further breakdown of a modular blockchain

Modular blockchains consist of layers designed for a particular action. There is a division of labor for better results. Consequently, the main advantage of a modular blockchain is fixing the “scalability trilemma,” a major challenge with blockchain technology:

Modular blockchains allow for decentralization, protection, and scalability. Within the real world, this translates into users being able to avoid Bitcoin’s long confirmation time or high Ethereum gas fees, for example.

Assigning each layer or section a single mission or task ensures security, speed, and efficiency.

Despite a modular blockchain being split into distinctive layers, it nevertheless ensures consensus and, as a result, security. No single server can solely manipulate the network even if overloaded.

Social consensus is used to make even essential selections regarding transactions, helping to grow an absolutely decentralized platform.

A developer can introduce Layer-2 answers to resolve the blockchain’s hassle. As an instance, Optimism & ZK rollups for Ethereum make use of robust security while lowering its fee and latency.

Different use cases for the modular blockchain architecture

In a modular blockchain, every project is handled by a separate group of layers which might be closely-associated chains working at the identical layer. For example, each app-chain in the Cosmos network leverages the read-made modules provided by the Cosmos Stack. The Cosmos Stack includes Tendermint Core, a pre-constructed consensus engine, Cosmos SDK, a software development kit, and IBC, a network communication protocol. This enables developers to use these modules and easily build an application-specific chain in a modular-blockchain ecosystem.

The network of interconnected blockchains handles each transaction just like a typical blockchain would. Transactions are verified and delivered to the main (base) pool or dropped.

A miner/validator can broadcast a block to peers if they are successful in locating the unique identification for the candidate block as required through the proof-of-work/proof-of-stake requirements. Once all transactions are confirmed as authentic via the various nodes, the brand new block is added to the chain. Different miners retain this technique, steadily lengthening the chain by adding new blocks on top of the ones which have already been mined.

Benefits and drawbacks of a modular blockchain

The most noticeable benefits of the modular blockchain include scalability, ease of design, and flexibility.

A monolithic blockchain allows a user to have all the expected functions of the blockchain in just a single layer called “Layer-1”. This makes blockchain creation uneasy to achieve because it tries to deal with all functions at a time within a single layer. With a modular blockchain, the functions are shared among different layers, improving scalability and preventing possible network disruption.

To launch a brand new blockchain, miners must face several issues related to security and decentralization, which may equally prevent some from optimizing the out-of-network hash rate (opportunity).

When miners concentrate less on particular functions like consensus, it gives them the ability to leverage the layout and create new blockchains more quickly, regardless of the blockchain architecture.

Every blockchain in cryptocurrency shares a few simple characteristics, like ensuring data availability, security, consensus, and transaction execution. Typically, blockchains manage this kind of function at the identical layer. Modular blockchains ensure more efficiency by offloading work to other layers.

Even though modular blockchains solve various issues where monolithic blockchain lags behind, modular architecture comes with its own set of drawbacks. These are:

Unlike monolithic blockchains, which execute each blockchain function in a single layer, modular chains may lack protection-related characteristics.

It is often difficult to design without the involvement of expert operators due to their design’s complexity.

Some modular chains may not be able to draw interest to their native tokens due to restrained use cases. For example, when compared to an execution layer, a layer dedicated to consensus and data availability will, in all likelihood, see much less use for its utility token. This makes it very difficult to attract users to these networks.

As the blockchain industry witnesses improvement or updates to different existing solutions, efficiency is key to new development. Modular blockchain networks such as Cosmos or Celestia ensure that a network remains enormously scalable without tampering with security and decentralization.

Monolithic chains like Ethereum and Solana are already drifting to a modular design since blockchain developers now see the need for a seamless and cost-effective transaction arrangement.

However, in the recent past, we’ve witnessed the Ethereum ecosystem moving towards modular architecture with the development of Layer-2 and rollups. This could be considered an indicator of Ethereum being in a transition that marks the resolution of the blockchain scalability trilemma at a great scale, a first-ever and by all means a significant industry milestone. 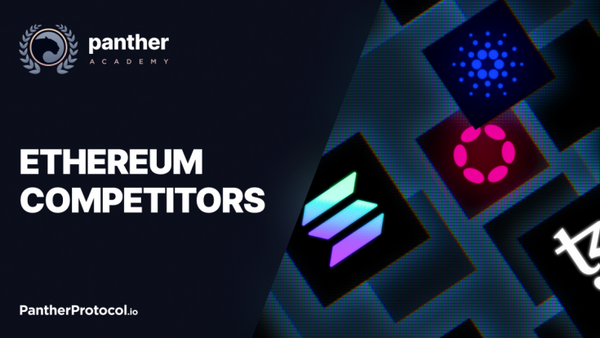 Introduction As Ethereum emerged to provide smart-contract functionalities that the Bitcoin network could not support, Ethereum competitors rose to provide alternatives to its lingering problems. So-called “Ethereum killers” may pride themselves on being novel ideas but, until now, most of their success is largely attributed to the limitations of the 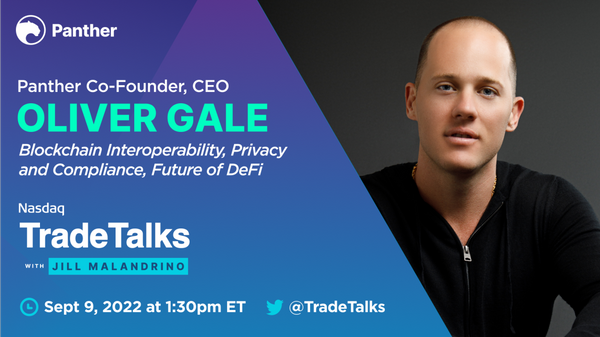 Panther aims to achieve a delicate balance between privacy and compliance, as Oliver Gale explained in this week's Nasdaq TradeTalks. 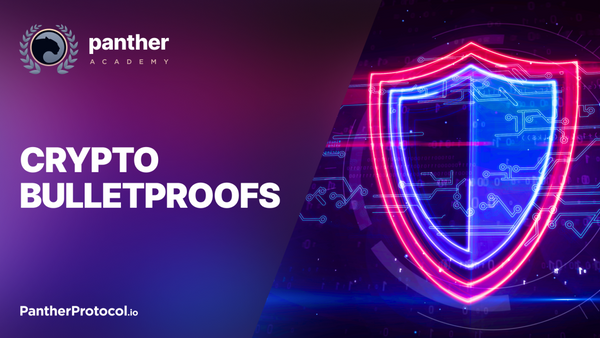 "Short like bullets, yet offering bulletproof security assumptions". With these words, Shashank Agrawal's named the technology that played an essential role in stabilizing blockchain privacy solutions. Although Agrawal's epic caption meant that this new technology earned the name bulletproofs, it does not explain why they’re safe, useful, and necessary